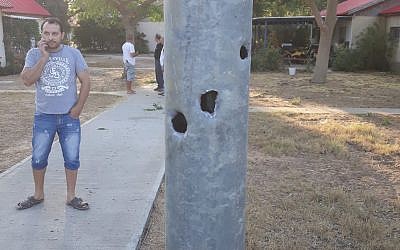 Rocket sirens blared in the south throughout the early morning hours Wednesday, as barrages totaling some 45 rockets and mortar shells were fired toward Israeli towns, prompting three rounds of Israeli airstrikes on Hamas military sites in the Gaza Strip.

At least three rockets fired from the coastal enclave landed inside Israeli communities adjacent to the border, while a further 10 landed in open fields, Israeli officials said, after increased tensions led to a night of attacks and counter-blows.

The IDF said fighter jets struck 25 targets in various military bases belonging to the Hamas terror group from the north to the south of the Gaza Strip in response to the rocket and mortar fire.

The damage caused to a streetlamp by a rocket that was fired from Gaza, which landed in one of the communities of the Eshkol region on June 20, 2018. (Eshkol region)

The Israeli military accused Hamas, which rules Gaza, of “targeting Israeli civilians throughout the night with a severe rocket attack and dragging the Gaza Strip and its civilians down a deteriorating path.”

Of the projectiles fired at Israel, seven were intercepted by the Iron Dome anti-missile system and at least three failed to clear the border and landed inside the Gaza Strip, the army said.

There were no immediate reports of injuries on either side of the border, but the Eshkol council reported damage to a number of buildings and cars.

In response, Israeli aircraft struck three Hamas targets in the south of the coastal enclave around midnight on Tuesday.

The first rocket attacks came less than an hour later, when Palestinians fired five projectiles at Israel, the army said.

Sirens blared in Israeli communities surrounding the Gaza Strip over the course of the next few hours, as Palestinians launched wave after wave of rockets and the Israeli military responded with airstrikes in the coastal enclave.

The last rocket attack of the exchange took place at approximately 5:30 a.m., according to the army.

The overnight incidents mirrored several rounds of rocket fire and IDF strikes earlier in the week.

Defense Minister Avigdor Liberman warned Monday that Israel would not allow Palestinian terror groups to continue to launch incendiary devices into Israeli territory, the likes of which have caused hundreds of brush fires and burned thousands of acres of land in recent months.

“If anyone thinks it will be possible to continue with the daily kites and fires, they are wrong,” he said during a tour of Israel Aerospace Industries, the country’s primary aerospace manufacturer.

Rockets launched by Palestinians earlier this week were the first to be fired at Israel in over two weeks, breaking a tacit ceasefire that has largely held since a day-long flareup in late May.

The airstrikes on Hamas facilities appeared to be a new tactic by the military to deter Palestinians from flying airborne arson devices into Israel, after its previous attempts to do so by firing warning shots at kite-flyers failed to yield results.

The IDF said its strikes were “carried out in response to the launching of incendiary and explosive kites and balloons at Israeli territory,” which it called a “terrorist activity that endangers the lives of southern residents and has damaged large amounts of land.”

The army warned that it had the “intelligence knowledge and operational capability” necessary to conduct further strikes in Gaza if the balloon and kite attacks did not stop.