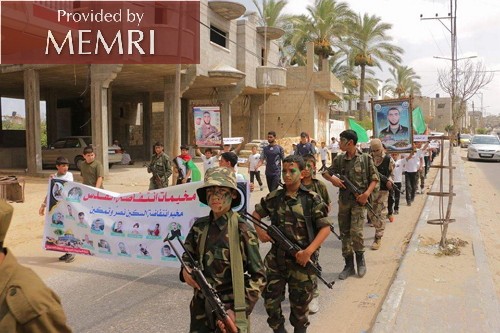 Palestinian youths – many of them minors – and older residents of Gaza graduated late last week from what Hamas termed a “summer camp” in the Palestinian enclave.

In the camp, the youths learned skills ranging from traipsing down buildings to launching shoulder-fired missiles. According to AFP, during the camp some 25,000 Palestinians took part in combat training. The youngest were as young as 15; the oldest trainees are 60-years-old.

“The goal of these military training camps is to train the vanguard for liberation – spiritually, intellectually and physically – to be ready and able to play its role in liberation,” said a statement by the Izz ad-Din al-Qassam Brigades, Hamas’ military wing in late July, when the camp opened.

Participants spent two weeks being “trained in military techniques and in firing live ammunition” as well as “first aid and rescue techniques.”

Hamas has long run summer camps devoted to sport and study of the Koran in Gaza but over the winter the al-Qassam brigades launched a new kind of camp, giving military training to 15 to 20-year-olds.

Human rights activists condemned it as a forced militarization of Gazan society and a violation of children’s rights.

Brushing off the criticism, the brigades are repeating the exercise with the summer camp, while raising the upper age limit to 60.

Among the more bizarre photos one can find youths jumping through hoops of fire – a staple of Palestinian combat training despite the practice’s uselessness on the modern battlefield. The participants also launched a cardboard cutout of the Aqsa Mosque tied to a bunch of helium filled balloons.

A photo essay published by The Telegraph contains additional images.

Israel withdrew its military and civilian presence from Gaza in 2005. Hamas seized control of Gaza in 2007, ousting the Fatah forces of Palestinian Authority President Mahmoud Abbas in a violent takeover.

Avowedly committed to the destruction of Israel, Hamas has fought three rounds of conflict against Israel since it took charge, most recently a 50-day war last summer. It has bragged since that it is again digging tunnels to the Israeli border and developing and manufacturing new rockets for use against Israel.

– AFP contributed to this report.