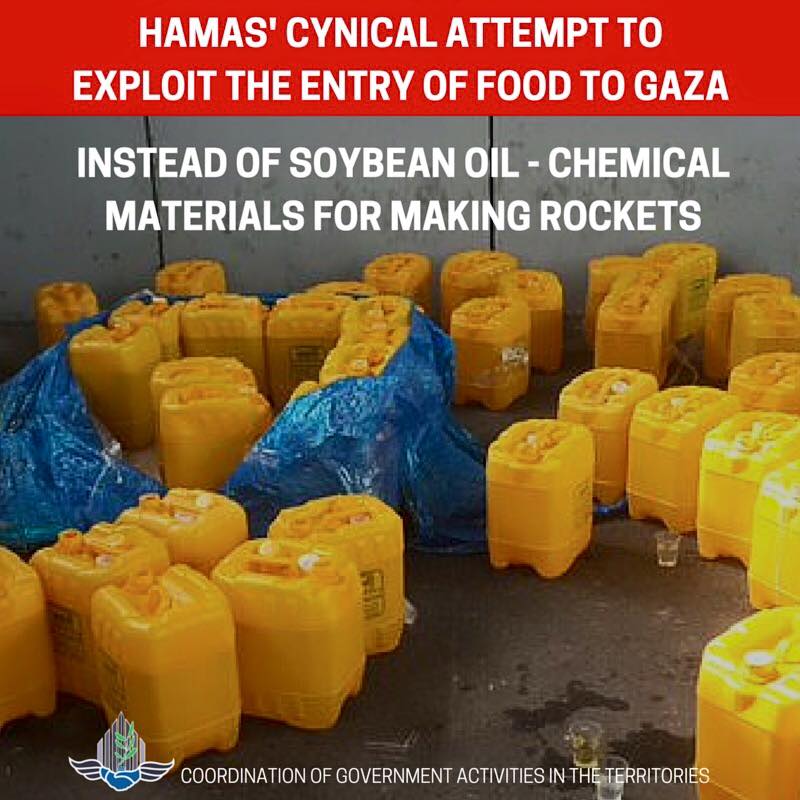 Hamas makes another cynical attempt to exploit the entry of food for Gaza residents, trying to smuggle chemical materials for rocket fuel under the guise of “soybean oil”.

A joint operation between the David Unit of the Civil Administration and the Crossings Authority of the Ministry of Defense foiled an attempted smuggling of chemicals used for rocket manufacturing. Heading for Gaza, a Palestinian truck arrived at the Tarkumya crossing to transfer “soybean oil” from Hebron. The substance was sent for laboratory tests after arousing the suspicion of security guards and the David Unit inspectors. These further examinations revealed that the trucks contained a substance called TDI, which is a key component for rocket fuel used by Gaza-based terrorist organizations such as Hamas and the Islamic Jihad. The 450 liters of material were seized, and the individuals were brought in for questioning.

The David Unit of the Civil Administration works to prevent smuggling of all contrabands and pollutants, having confiscated around 280

trucks with life-threatening materials and substances since its 2014 foundation.

Beni Elbaz, the Head of the Civil Administration’s Environmental Department, praises the David Unit. “Our inspectors work relentlessly to intercept the transfer of dangerous and destructive materials through the Judea and Samaria crossings. We will continue our work to thwart these attempts in order to protect civilian lives.”