Israel is making every effort to prevent uninvolved civilians in the Gaza Strip from being harmed. Earlier today (13 July), the IDF warned the local population in the northern Gaza Strip to seek shelter elsewhere. In response to heavy rocket fire from these areas, Israel is planning to target concrete terrorist infrastructure and operatives in that area but is attempting to do so with as few casualties as possible among the uninvolved civilians.

In stark contrast to Israel’s concern for the residents of Gaza, Hamas officials continue to encourage the local population to be human shields and to endanger their lives. Today, Hamas’s Interior Ministry Spokesman in Gaza called on the population in northern Gaza Strip to ignore the IDF’s warnings [example attached] and to stay in their homes. He also urged those who had already left to come back immediately. Hamas is once again guilty of deliberately endangering the lives of Palestinians in the Gaza Strip. 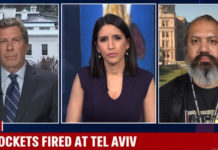