When US President Barack Obama was named the 2009 Nobel Peace Prize winner, a tidal wave of reactions emerged from international leaders. Many western European leaders responded positively, with French President Nikolas Sarkozy stating that the award showed that “America had now returned to the hearts of the worlds’ peoples.” Meanwhile, German chancellor Angela Merkel declared that the award was an incentive to do more for world peace.

Nobel Committee Chairman, Thorbjoern Jagland, former prime minster of Norway and a Labor Party politician tried to explain that “it could be too late to respond three years from now” to Obama’s call for change. The Nobel Committee further elaborated that it was Obama’s efforts to ease Western conflict with Muslim nations and nuclear disarmament that they found particularly worthy of the prize.

There is a less noticeable reason for the Norwegian committee and Western Europe’s overall embrace of President Obama’s diplomatic dialogue with Iran. Many European leaders have a vested interest in keeping Iranian President Ahmadinejad content because of their countries’ involvement in Iran’s oil and gas industry.

The Tehran Times, Iran’s leading international English-speaking daily reported on August 29, 2009 on Iran’s major oil and gas contracts with its European partners. “Iran has been negotiating with over 30 companies from 9 European nations in recent years to carry out energy projects, despite mounting global economic sanctions and political pressures,” the article said.

Norway’s oil and gas companies, in particular, are heavily involved in Iran’s energy production. Statoil, Norway’s biggest oil company is currently developing what is known as the South Pars project to tap Iran’s biggest single gas deposit. In a Reuters report Statoil indicated that unless there was “significant sustained improvement in Tehran’s relations with the West,” the company would not expand activities.

Obama’s engaged diplomacy with Iran has offered European energy companies new hope after years of Iranian isolation under the Bush Administration. According to the Reuters article, “major European energy firms are keen to tap the world’s second largest gas reserves but have shied away from investing huge sums under pressure from their own governments and Washington.” Statoil’s Vice President Peter Mellbye indicated in the Reuter report that the early months of the Obama presidency have shown “that there might be signs that things are changing…”

In addition to Norway’s economic ties with Iran, The Tehran Times reported that in 2008, the Swiss energy group EGL signed a 25-year gas purchase worth over $13 billion with Iran. In past years, French-based energy companies including Technip Conflext, have built petrochemical plants in the Persian Gulf worth hundreds of millions of dollars. Spain has been negotiating with the National Iran Gas company to construct refineries. Austria, Italy, Turkey, Russia and China are also involved with Iranian energy projects.

The above may suggest why Western Europe favors dialogue over military action with Iran and why European leaders favor President Obama’s policies. A hard line stance against Iran’s nuclear arms, one that involves international military action would place billions of dollars of European investments in Iran’s energy production at stake.

If President Obama can do more to strengthen this lucrative relationship, the continent that has the most to gain is Europe. And the Nobel peace prize, as the Norwegian Nobel committee indicated, is just one way to urge the US president forward in that direction.

Indeed, Mr. Jagland himself is doing all he can to make President Ahmedinejad happy.

As the chairman of the board of directors for the Oslo Center for Peace and Human Rights, he has refused to recognize any human rights for the young Iranian killed by the Islamic regime on the streets of Iran. Other human rights violations committed in Iran also receive little response from European countries that have no problem publicly condemning Israel for alleged war crimes.

From persecuting its Bahai minority to securing its national elections by force, the Iranian dictatorship will stop at nothing to gain power and promote its radical Islamic agenda. The Jerusalem Center for Public Affairs warns in its September bulletin that “Iran is a true revolutionary power whose aspirations extend into the oil-producing states.”

While Western Europe continues with its economic investments in Iranian energy, and grants President Ahmadinejad the UN platform to spew hatred against Israel and the West, Iran is gaining the momentum to become the nuclear powerhouse of the Middle East. It is time that Norway and Europe place oil aside and respond to President Ahmadinejad’s actions – instead of to President Obama’s calls.

Anav Silverman is the International Correspondent for Sderot Media Center, a social media organization dedicated to bringing the voices of Sderot residents to the attention of the global community.

Not a false alarm 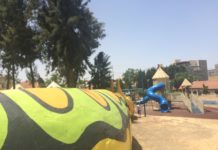 Red Alert: Living in a world where 10 seconds separate you from life and death