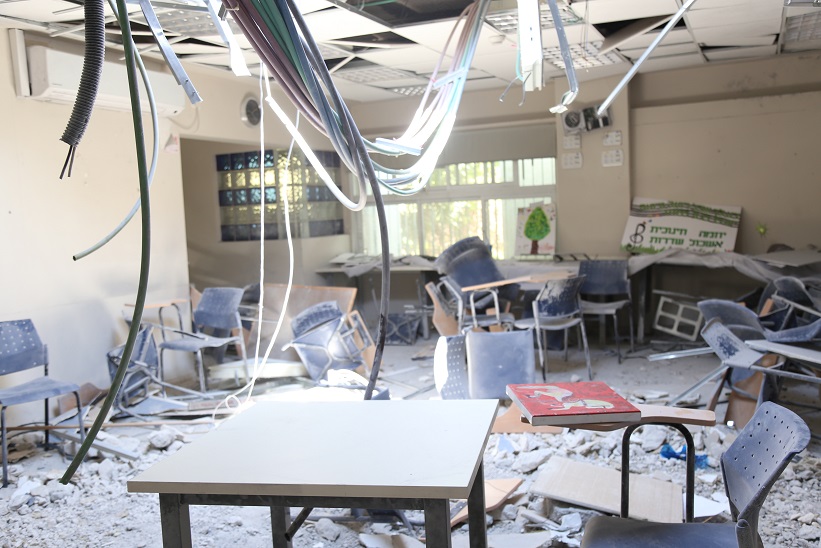 July 1, 2016. It’s Friday night and families are jammed into apartments eating Shabbat dinner and saying prayers over the candles and the wine. Children are playing, grandmothers are gossiping, and the entire city of Sderot eases back in its chairs and takes a deep breath.

Suddenly, the sirens go off and without missing a beat the same families scoop up their children and head to their bomb shelters. It’s a Code Red! A lone Qassam rocket sails over Sderot, perusing its beauty, and finds its mark: HaBayit HaPetoch, an Open House for children and adults. It tears through the roof and lands in a room usually reserved for classes teaching women to be caregivers. Chairs go flying, windows fracture, books are blown off tables, and rubble dirties the meticulously clean floor. Silence. And then the people of Sderot pour out of their homes to investigate. Surrounding the school is a heavily populated residential area with a mix of families, seniors, and students. There are no casualties. Mothers kiss the heads of their children, students exit their shelters with shaky legs to hug their friends, and the city of Sderot moves on.

Dar, a Sderot Media Center local guide and student who has lived in Sderot for eight months, picks me up from the Sderot Train Station on the Sunday following the attack and we talk while we drive to the school. When the Code Red occurred he was with his friends and they couldn’t find the key to their bomb shelter. A family living near them welcomed them into theirs and they waited out the attack. In his service in the army he experienced many Code Reds but he said as a student “…it shakes you to your core…”. He took me inside the children’s open house and I looked at colorful, spotless classrooms before he showed me the affected room. A beam of cheerful sunlight shone in the center of the room framed by hanging wires and loose ceiling tiles. The floor was covered in dust and strewn with overturned chairs and desks.

It was the first time I had ever seen anything like it and it took me a moment to shake off my shock and continue listening to Dar. “The rocket that hit the preschool was made very cheaply, probably, usually out of piping Israel installed in Gaza for sewage.” He made it a point to express how cheap it was to cause large monetary and psychological damage from the Hamas-controlled Gaza strip.

He can’t say if this attack is the first in a new outbreak of violence, but places blame on Hamas incitement in the Gaza strip. “Everywhere in Sderot you will see the children at the pool, with families, being dropped off at summer camp… and in Gaza, Hamas’s summer camps are starting as well. Children are learning how to stab Jews and to hate Israelis.”

Almost directly adjacent to the school, Tair and Kfir live in an apartment with several other students. They were present during the attack and Tair testified that she saw a yellow cloud explode toward the sky. Both of them study music composition in Sderot and have lived there for about ten months. Kfir’s workspace, where he composes his music, doubles as the bomb shelter. When they and four others crowded into there during the Code Red, they watched the frequency detectors on the machines go crazy when the rocket landed. I asked if they would ever settle down in Sderot and they vehemently shook their heads. One might think they wouldn’t settle here because of the constant threat of rocket fire one mile from the Gaza strip. But that wasn’t it. They both would just prefer to raise children in a smaller town, rather than a city. The barrage of rockets has no influence on your answers? No. It has none.

The next person we spoke to was Frida, one of the teachers at the children’s Open House. She lives outside Sderot but has worked at the Open House since 2007. While we chat, Frida is preparing for an end of term party for a group of Kafkazim students (from the Causcuses). They had spent a long time working on their Hebrew so they will be ready for the school year and didn’t allow anything to stop their joy as they showed up in neat dresses and shiny shoes.

Frida is coloring in the alphabet in paper while she answers my questions with a sweet smile and laughing eyes, I notice behind her head the windows to her office where the rocket created a mural of cracks. When I ask her about it she waves her hand dismissively and continues telling me about the programs that the school offers: preschool, Hebrew training, occupational therapy, and more. It’s the Sunday after the attack and she tells me that two students are here for therapy and invites us to attend the party where her young students are already filing into a classroom. When asked why HaBayit HaPetoch was open so soon after the rocket attacks, she replies, “You can never get used to it [Code Reds]… but you cannot let it stop your life.” She doesn’t know exactly how much the damage is but had heard from inspectors that it could be anywhere from four hundred thousand shekels to one million.

When she saw my look of shock she patted my hand and smiled. “It was a miracle it landed here. There were no students because of Shabbat, and had it landed a couple meters in any other direction it would have hurt a lot of people.” I asked her what she wanted people to know about Sderot and while she colored she answered: “Sderot has learned to cope… we are a strong community… We are frightened and worried for our children but we have to go on.” Before we left I glanced behind me and saw Frida embrace two students and lead them into a colorful room to celebrate their hard work.

Dar dropped me back off at the train station so I could catch a bus back to Jerusalem. He told me that any time I needed a guide for Sderot to give him a call and made sure I knew which bus to take back home. He drove off with a big smile as he headed back to the center of Sderot, his music always turned down low in case of a Code Red.

After my day with Dar and HaBayit HaPetoch, I have concluded that there is nothing more Israeli than the city of Sderot. A school is hit with a rocket and less than two days later children run to it for a party or lessons. Cranes can be seen building more apartments so new families can move in. Life goes on in full force in Sderot.

Alexa Goldstein is an American student from the University of Central Florida who is interning with the Sderot Media Center.