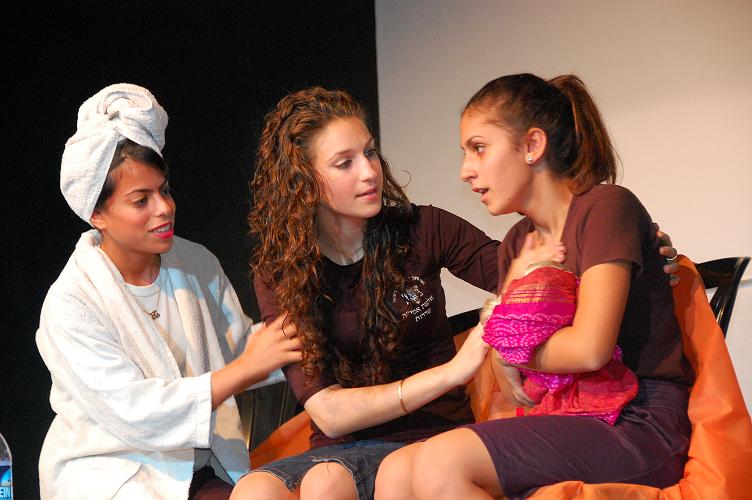 Jerusalem–On Monday night, October 26, the high school girls of the Sderot Media Center Community Treatment Theater performed the dramatic production of Children of Qassam Avenue, in Jerusalem‘s Center Stage Theater at Merkaz HaMagshimim Hadassah. It was the girls’ first performance outside of Sderot, the Western Negev city targeted by thousands of Gaza rockets since 2001.

“The girls’ ability to weave humor within their personal stories, and then deliver the painful punch lines was amazing. No government official could tell the story of Sderot the way these actresses did tonight,” stated Danny Seaman, the Director of the Israel Government Press Office to Sderot Media Center. Scene from Children of Qassam Avenue in Jerusalem.

“What was even more amazing was to see how the youth of Sderot have been able to cope during these difficult times. Today, it is our responsibility as a democratic state to ensure that these girls have normal futures.” Seaman continued, “I had no idea what to expect tonight, and it ended up being a fantastic performance.”

The girls performed before a packed auditorium, stunning the Jerusalem audience with their portrayal of Sderot life. Several audience members became teary eyed during the passionate monologue of the main character, Shir, who plays the daughter of a mother on relaxation pills and a bus driver father, who faces tremendous pressure in driving around Sderot during rocket escalations. The girls depict a scene after a rocket attack, from the Jerusalem performance.

Margalit Gutman, a native Jerusalemite explained that “As residents of Jerusalem, we hear of the rocket attacks in the news, but we do not truly understand the impact that these rockets have on the people living in the region.”

“Tonight’s performance gave me insight into the lives of Sderot residents that I never had before,” Gutman concluded, a mother of four. “The trauma, fear, and thoughts that Sderot residents experience every day is not something that we see in the media and therefore it was important for us see this on stage.” “It was hard to believe that some of the actresses performing tonight were only 16-years old. They played their parts with the maturity and seriousness typical of adults,” Poch said.

“We came to share our story of growing up under rockets, with the residents of Jerusalem. We want Israelis across the country to know what Sderot teenagers have gone through during these almost nine years of Qassam attacks,” said 16-year old Rotem Amar, one of the high school girls who participated in the near year-long Sderot Media Center Community Treatment Theater program.

Sderot Media Center is currently looking for sponsors to help bring Children of Qassam Avenue to cities across Israel in a six-month performance period with the goal of performing in the Knesset. In light of the Goldstone commission report and anti-Israel campaigns, the theater project aims to influence Israeli and international opinion on the Israel-Gaza conflict and the broader Arab-Israeli conflict.